I put Retina.it in similar territory with Autechre, Richard Devine, Frank Bretschneider / Komet, Atom™, Phoenecia, Kouhei Matsunaga, etc. It’s somewhat cold & mechanical, with heightened strangeness or intensity of electronic sounds, and based strongly in rhythm and texture. Not so much in the melody or tonality end of things, though there are often tonalities and sometimes melodic elements. There’s followable beat for the majority of the music they make, though the music is decidedly experimental. Like many electronic artists, for Retina.it the rhythmic element is used as a canvas or limiting factor to package or focus the experiments in sound and texture. It’s a happy medium strung carefully between danceability (or headnodability) and wild technological abstraction.

Retina.it is Lino Monaco and Nicola Buono, who in the mid 90’s started with Qmen, which was a sort of techno project. They were always more inclined toward sound research and experimentation, so their efforts were siphoned away from the techno activities as they moved toward the formation of Retina.it closer to the year 2000. A couple of interesting side projects along the way worth mentioning are Resina and Brood. Resina is an album made by Retina.it with Marco Messina, head of the Mousikelab label, and Brood is a single by Retina.it with John Hughes, head of the Hefty label. Unfortunate that these side projects haven’t been more active, but if you can find them these are some good stuff. All along through the side projects and numerous compilation appearances they’ve continued their trend of research and experimentation up to the present, appearing at numerous high profile festivals in support of such people as Kraftwerk, Plaid, Alva Noto, Pole, Matmos, Telefon tel aviv, Ikue Mori, and Kim Cascone. 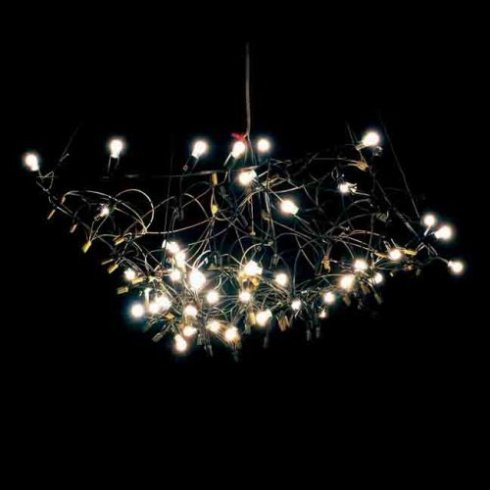 I came across Retina.it’s Semeion several years ago at a shop for about 6 dollars I think it was. This local shop does an excellent job of pasting bits of text to most recordings giving a description at least of the artist, and often of the recording itself. I think the description said something about Autechre, and it was on the Hefty label, so I took the six dollar dare and was very satisfied. I spent several weeks listening to it almost daily in the car to and from work, and since then I probably have been getting it out and listening to it a few times every few months or so – which may not seem like much, but having the option to listen to any other of probably 2,000 albums or so I have at my disposal, I think it’s a complement to any artist if somebody craves to listen to their recording so consistently. I later acquired Volcano Waves 1-8, and the self titled album. Both are also quite enjoyable to me. My favorite recording of theirs is a free mp3 they had posted at their website called Vault Selections, which is a 30 minute stream of exceptional electronic music. Check out their site, where this can be downloaded and other things (Randomicon & the more recent Descending Into Crevasse included…) can be purchased, too:

Each digipak is supposed to be unique, having all of the letters of RETINA IT RANDOMICON rearranged in random ways, as illustrated by the gif animation. Neat. I do wish the artwork was more than plain white background with black text, but I guess this is hard core electronic music and sometimes this ultra minimalism is the right taste for the packaging. For what I lose in imagery I gain in uniquely randomly rearranged letters. The quality of music legitimizes the lack of imagery. The randomly rearranged letters floating in pristine white space speak of the music’s activities; of rearrangement of stark objects against a wide open background that can be interpreted in many ways. The background can embody different climates of thought and emotion each time you listen. Though the shapes in the foreground still hold the same meaning and structure, they’re moving around; there’s gibberish on the cover, but when you dig in you find sense under the disc.

For the first week or so of listening to the album I was pretty excited and thought it met my expectations. I wasn’t completely blown away, but I was satisfied with the purchase and convinced that it was a good album. Then for some reason or another I got a bit bored with it and put it away for a few months. There was, as usual, a lot of other more immediately satisfying stuff to be listening to. Then I started getting it out every month or so and having a listen, but I wasn’t very affected by these listens. The rhythms didn’t seem to be as impressive, magnetic or hypnotic as I hoped them to be. Most tonal aspects of the album are of the oddly minimal sort, seeming to lack graspable emotional content, which isn’t that unusual of a complaint about this kind of electronic music, it just usually isn’t one I find myself making much. I guess I was having a hard time grasping what good was really going on; the point(s?) or the aim or the vibe or the spirit or the juice or the kicker seemed just out of focus. The phase at which you haven’t decided that you dislike it, yet aren’t grasping onto or being grabbed by much is an interesting stage to be at in the process of appreciating an album. I like it because it seems that there are secrets there to be figured out. Sometimes it just ends up being an illusion, and the album is found to be a flavor you just don’t enjoy. Other times, such as this experience I’ve had with Randomicon, there’s a great payoff in the unlocking of things previously not comprehended and apprehended, perhaps due to disadvantageous listening conditions. I’ll say that it was unfortunate I did not listen to this in headphones much sooner. That and a solidly loud listen on a different set of speakers is what brought out the details and feelings I was missing.

Tips to myself and others, from myself, based on this experience and a few others I’d forgotten:

What came to me after the usage of better listening modes was not a huge revelation, in that it was something I’ve already mentioned, it just hadn’t registered properly due to improper listenings. The magic of Randomicon is in the minimal yet potently immersive texture and rhythm, to me this is emphasized moreso than with their previous recordings. Their play with subtle frequency shifting, reverbs, rhythmic accents, and variety of sounds within a seemingly simple jittering framework of repetitive beats and rhythms is hugely fun and stimulating to listen to. Every piece is so thorough in its textural composition, has its own palette of statics, pops, clicks, rumbles, crunching, so that the album seems to bear infinite listenings without exhaustion of detail. At high volume in a good room at home, or at a healthy volume in some headphones is where this is best listened to.

A floating hum like an air conditioner running submerged in an indoor swimming pool creates a mysterious mood at a low simmer. Electronic buzzing, subtle clicks, quietly manipulated statics are panned and build the atmosphere. After a build of intensity, a slightly off-kilter bass-throb rhythm arrives and keeps a medium pace of time over the low, slowly oscillating (running on medium air conditioner submerged in indoor swimming pool) hum. Gentle textures are sprinkled on patiently and panned – leaving plenty of space for the strangeness of the aural scene to breathe until the sounds digress and the track is finished. Simple. Not a winding trip through many lands, but a short, deep rumination of minimal tones and crisp synthetic audio spaces and metallics.

A friend of mine and I were talking about a piece of art I had sitting in my living room yesterday. I asked him how he felt about it. He picked it up, looked it over, and said something like, “…Yeah, it’s cool, pleasing to my eyes, (lists some specific details of object), but you know what? I just put it down and think, I’m done now…never need to look at that again. I got all there was to get out of it in one look.”

Recordings like Randomicon are not of this quality. To me, this album is one that I can always find new secrets in, always feel positively charged and challenged by. There is tension and release, sometimes just tension, but never the no-thoughts pile of instant gratification mega-brand canned cherries in high fructose corn syrup sauce. (Too much will give you cavities, screw up your digestion, and help you come down with a robust case of cancer.) Admittedly there are days I really don’t want to listen to something like this, and I go for something like an orange or at worst some dark chocolate. If you can smell this metaphor correctly, I do not like canned high fructose corn syrup sauce cherries, no matter how much lots of people think I should like and gorge on them happily, or how popular, easily available or cheap they are. If I’m not feeling up to the Randomicon challenge, I’ll go for something sweeter, like Semeion. Retina.it seems to me to be one of a small number of strongly devoted electronic artists truly dedicated to seeking out new territory without cheap sweetener. They’re healthier for it, and so am I.

New observations:
Protenomaly is released today.
Protenomaly has a video component which will be available upon release (8/23/2021) via YouTube.
Looking to send to reviewers, podcasts / radio stations…
August 4
#MatthiessenStatePark about 2007