One of my oldest friend-brothers has a pointed enthusiasm for bad horror movies. When we spend time together, we often end up watching a preposterous horror movie and laughing at it. This was something we spent a big chunk of our adolescence (and a little beyond) doing. No problem. I’m into it, too. It’s an every-once-in-a-while thing.

The other night, though, it was two movies directly in a row. I don’t watch movies often, and watching a huge screen for too long usually makes me nauseous and results in a migraine-and-heave situation. That’s kind of where it got me. I had a headache from watching a screen for too long and being up way past my early-30s-fart bedtime. Most noticably, though, I did not feel like the headache was worth it. I enjoyed the first movie (started around 9:45pm), Night Watch (1997), in which Ewan McGregor plays a young law student that takes a 3rd shift security guard job at a morgue. 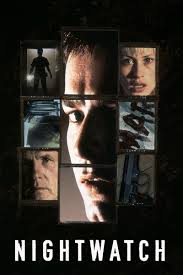 He is implicated in a series of nasty necropheliac murder-mutilations and suspenseful fearfulness ensues. There is also some philosophic content dealing with the urge to live as vibrantly as possible and not to give in to the dullnesses of old age. At points throughout the movie, characters talk of seizing of intense experience as a key purpose and ideal of every life. It’s a fun every-movie-should-be-at-least-this-good thriller. 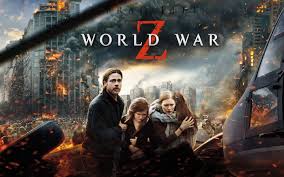 The second movie was World War Z (2013), in which Brad Pitt goes on a frightful journey around the world in search of a solution to the rapidly advancing worldwide plague of extremely aggressive and fast-movie zombies. Do not ask me why I did not choose to stop the movie at 1am when my friend decided to call it a night, for I do not know. I did stay up until 2:45am or so in order to finish the movie, and I did not feel like I benefited from doing so. I do not fret over it, though, since there are far worse choices I could be making.

This doo-doo double feature was a dissatisfying usage of passive time. I like to spend passive experiences (music listening, movie watching, hanging loose w/ friends, seeing live music, etc.) taking in stimuli that provide psycho-physiological nutrition. On this night I speak of, I did not nourish myself. Instead of feeling energized and percolating with new feelings of stimulation, I felt as if I had just taken some hot, fresh doo and dalluped it right into my psycho-system. I didn’t recover until a day and a half later, after re-setting my sleep schedule and having a bit of physical activity. Ride the bike. Get some sun. Purge the misuse of the human machine. 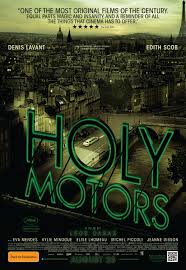 The next evening, I was fortunate to quickly pick out Holy Motors from Netflix’s seemingly-infinite-yet-glaringly-incomplete library of foreign films. The film drew me in with its surreal events and aesthetics, and nutritionally satisfied my intellect with trinkets of deep thought. There is a followable chronology, with some beguiling twists, and a clear-enough ending, but the content is consistently abstracted, fantastic or embellished. A lot of the cinematography has a cinema verite approach, but ultimately the movie has a lushly stylized shot composition palette engaging in many experimental sequences. Dolly shots, intricate color composition, slow motion, reversal, digital animation and use of video filter effects all work to make the film into a varied and spectacular work of the imagination. I thought it bore similarity in feel to a film by Luis Bunuel called The Discreet Charm of the Bourgeoise; an awesome little surrealist commentary on the foulness of the ruling class. Events and behaviors throughout the movie speak volumes. 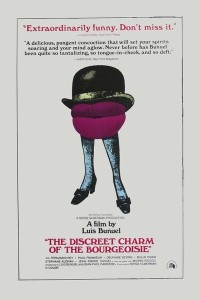 These actions also ask questions of the viewer, and thankfully we are given the space to ponder them, rather than having the answers ladled onto our faces as so many doo-movies are wont to do. Holy Motors is a very cool surrealist parable that I found highly enjoyable. This is the most enjoyable film I’ve seen since Under The Skin, and I would put this on the same level; very high. 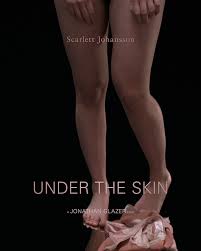 Mystification is the plentiful currency of these movies, and I am always greedy for mystification. These are not doo-movies. Please believe me.

I wonder; if I would have watched Holy Motors as the second movie of the double feature (rather than World War Z) would my feelings of discomfort and out-of-wack-ness been taken as positive aspects, adding to my enjoyment of the experience of this movie? Sometimes spontaneous events involving over-exertion of ones physiology can be wonderfully enjoyable and beneficial. I think things can be learned from somewhat trying or negative experiences, but I find that often what is learned from such events are things already known – if only intuitively. If your gut tells you not to go in that crappy bar you’ve been in a dozen other non-gratifying times, don’t go. If your gut tells you to shut off the TV and go to sleep, mium carpe diem quam bene iudicasse iudicantis per salutem, dummy.

The two artists here each have their own interesting thing going on.
Justin Wiggan is a multi-media artist of the conceptually-advanced sort. He has a project called Life Echo, which is a fascinating psychological therapy experience-experiment for the elderly. Utilizing artistically arranged personal objects and sound recordings, elderly people (those close to dying) are given a deep readout of their own life experience. This carefully rendered, deeply personal “readout” is suspected to be capable of helping near-death individuals to cope with, fully accept and even enjoy the arrival of their end. The (research) project is explained over a series of deposited segments of information – divided into weeks. On one page, you read the following:
“A Life Echo is potentially a non -Invasive surgical procedure which can be governed by adopted familiarity with the L.E process. This could give the individual authorship and empowerment of self control in a healing experience.”
Those words right there are pretty representative of the kind of talk you come across when perusing the weekly information deposits. This is a fascinating art therapy / conceptual work foraging into the grounds of humanity’s future. Wiggan’s extensive discography (released on A Giant Fern, Centipede Farm, Jehu and Chinaman, Los Discos Enfantasmes, Altar of Waste, etc.) expresses this same level of artisanship and thoughtfulness.
Charles Barabe is a sound artist who has released beautifully strange and varied sound-collage-scape work on 905 tapes, 2 AM Tapes, ((Cave)) Recordings, Brise-Cul Records, and other excellent labels. His work is intricately edited and depicts complex psychological environments. Sampled field recordings, records, television recordings, electronics and other found sounds are used to construct abstract musical compositions. His palette of sounds is broad and he seems apt to explore as many nooks as possible. 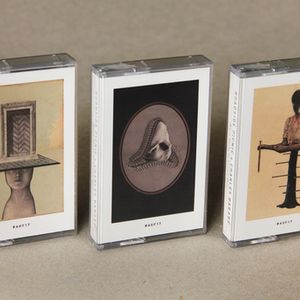 On this substantial cassette Worn Paths In Crown Dust, some finely articulated drone-noise is put forth in concise self-contained movements. I think the audio bears resemblance to some awfully beautiful and strange rhythmless recordings I’ve heard by Michael Northam (earthiness, intimacy of feelings), The Future Sound of London (high clarity ambience, frequent use of samples, certain sorts of electronics used), Vidna Obmana, Dead Voices on Air (the dark vibes and flavors of abrasiveness ). This is serious, deep-thinking audio work which takes the listener to many different imagination-hybridized places, all in high definition. Each piece has a central sound around which all of the other elements orbit, hover and gesticulate. The sound I perceive as being “central” is decided upon based on the constancy of a given sound. In each piece, one sound tends to be constant, while the others tend to change. On some of these pieces, the center-of-gravity-sound is only intermittent; it occurs briefly and gives way to a weighted pause. For the duration of a piece on side A just after the half way point, a low metallic clang and boom hinting at mechanical-ness happens at the rate of maybe twice a minute. It seems that similar ‘weird ominous-sounding mechanical metal-clang backdrop with expressive stimulatory textures on top’ programs occur throughout both sides of the tape. Despite my playfully hyperbolic wording I really enjoy and appreciate this approach, especially when it is done with taste and care. This is of course only a few pockets of the 66-ish minutes of the tape. It’s a stimulating listen with consistent movement throughout different moods and types of sound. The cover of this release and the other 3 of this batch by A Giant Fern are all gorgeous collages by Oejerum. The cleanliness of these enigmatic mystical image concoctions works in synergy with the articulate crispness of the audio work. This batch has been in frequent rotation since I received them fall 2014. Recommended. All of them.